In this chapter, we are trying to develop counting techniques that will be used in future chapters to study probability. One of the most fundamental of such techniques is called the Multiplication Axiom. Before we introduce the multiplication axiom, we first look at some examples.

If a student has two shirts and three pairs of pants they want to wear, how many different outfits consisting of these shirts and pants can they wear?

Suppose we call the shirts s1 and s2, and pants p1, p2, and p3. We can have the following six outfits.

Alternatively, we can draw a tree diagram: 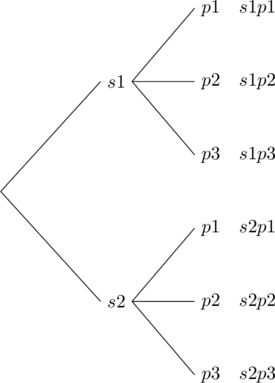 The tree diagram gives us all six possibilities. The method involves two steps. First the student chooses a shirt. They have two choices: shirt one or shirt two. If they choose shirt one, they have three pairs of pants to match it with; pants one, pants two, or pants three. Similarly if they choose shirt two, they can match it with each of the three pairs of pants, again. The tree diagram helps us visualize these possibilities.

If a student has two shirts, three pairs of pants, and two pairs of shoes they want to wear, how many different outfits consisting of these items of clothing can they wear? 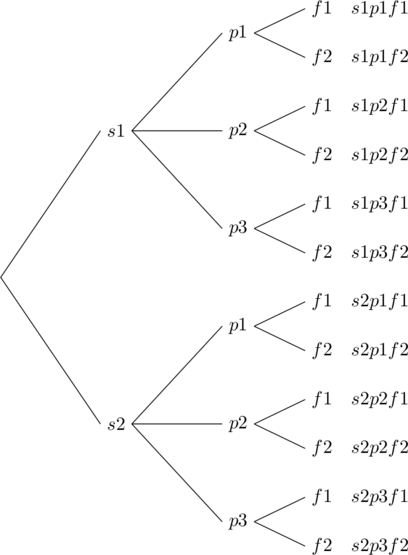 By looking at the different branches on the tree, one can easily see the other possibilities. The important thing to observe here, again, is that this is a three step process. There are two choices for the first step of choosing a shirt. For each choice of a shirt, there are three choices of choosing a pair of pants, and for each combination of a shirt and pants, there are two choices of selecting a pair of shoes. All in all, we have 2 · 3 · 2 = 12 different possibilities.

The tree diagrams help us to visualize the different possibilities, but they are not practical when the possibilities are numerous. Besides, we are mostly interested in finding the number of elements in the set and not the actual possibilities. But once the problem is envisioned, we can solve it without a tree diagram. The two examples we just solved may have given us a clue to do just that. Let us now try to solve the previous example without a tree diagram. Recall that the problem involved three steps: choosing a shirt, choosing a pair of pants, and choosing a pair of shoes. The number of ways of choosing each are listed below.

By multiplying these three numbers we get 12, which is what we got when we did the problem using a tree diagram. The procedure we just employed is called the multiplication axiom.

The general multiplication axiom is not limited to just two tasks and can be used for any number of tasks.

A truck license plate consists of a letter followed by four digits. How many such license plates are possible?
Solution
Since there are 26 letters and 10 digits, we have the following choices for each.

In how many different ways can a 3-question true-false test be answered?
Solution
Since there are two choices for each question, we have

We list all eight possibilities below:
TTT , TTF , TFT , TFF , FTT , FTF , FFT , FFF
The reader should note that the first letter in each possibility is the answer corresponding to the first question, the second letter corresponds to the answer to the second question, and so on. For example, TFF , says that the answer to the first question is given as true, and the answers to the second and third questions false.
In how many different ways can four people be seated in a row?
Solution
Suppose we put four chairs in a row, and proceed to put four people in these seats. There are four choices for the first chair we choose. Once a person sits down in that chair, there are only three choices for the second chair, and so on. We list these possibilities below:

How many three-letter word sequences can be formed using the letters {A, B, C} if no letter is to be repeated?
Solution
Imagine a child having three building blocks labeled A, B, and C. Suppose he puts these blocks on top of each other to make word sequences. For the first letter he has three choices, namely A, B, or C. Let us suppose he chooses the first letter to be a B, then for the second block which must go on top of the first, he has only two choices: A or C. And for the last letter he has only one choice. We list the choices below:

Finally, we’d like to illustrate this with a tree diagram: 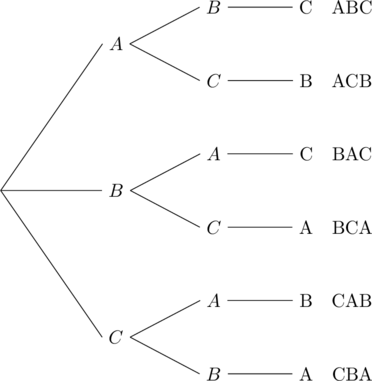 All six possibilities are displayed in the tree diagram.

1. A license plate consists of three letters followed by three digits. How many license plates are possible if no letter may be repeated?

2. How many seven-digit telephone numbers are possible if the first two digits cannot be ones or zeros?

3. In how many ways can a 4-question true-false test be answered?

4. How many different ways are possible to answer an exam with 8 multiple-choice questions containing 4 answer options, and 7 true-false questions?

5. You want to create a new password for your phone consisting of 4 numbers (0-9), but you don’t want to reuse the same number more than once. How many different password possibilities are there?