An expected gain or loss in a game of chance is called expected value. The concept of expected value is closely related to a weighted average. Consider the following situations.

Before you play the game you decide to find the expected value. You analyze as follows.

In the first situation, to find the expected value, we multiplied each payoff by the probability of its occurrence, and then added up the amounts calculated for all possible cases. In the second example, if we consider our test score a payoff, we did the same. This leads us to the following definition.

Expected Value: If an experiment has the following probability distribution,

then the expected value of the experiment is:

So on average, there are 1.56 children to a family.

As we have already seen, tree diagrams play an important role in solving probability problems. A tree diagram helps us not only to visualize but also to list all possible outcomes in a systematic fashion. Furthermore, when we list various outcomes of an experiment and their corresponding probabilities on a tree diagram, we gain a better understanding of when probabilities are multiplied and when they are added. The meanings of the words “and” and “or” become clear when we learn to multiply probabilities horizontally across branches, and add probabilities vertically down the tree.

Although tree diagrams are not practical in situations where the possible outcomes become large, they are a significant tool in breaking the problem down in a schematic way. We consider some examples that may seem difficult at first, but with the help of a tree diagram, they can easily be solved.

A person has four keys and only one key fits to the lock of a door. What is the probability that the locked door can be unlocked in at most three tries?
Solution 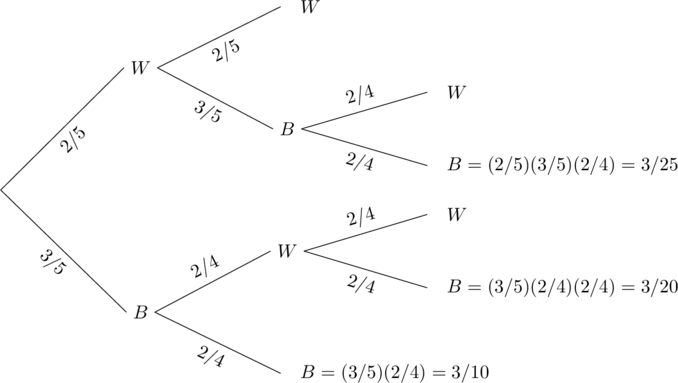 The probability that we will get two black marbles in the first two tries is listed adjacent to the lowest branch, and it =

The probability of getting first black, second white, and third black =

Similarly, the probability of getting first white, second black, and third black =

Therefore, the probability of getting exactly two black marbles in at most three tries =

1. In a European country, 20% of the families have three children, 40% have two children, 30% have one child, and 10% have no children. On average, how many children are there to a family?

2. A local community center plans to raise money by raffling a $500 gift card. A total of 3000 tickets are sold at $1 each. Find the expected value of the winnings for a person who buys a ticket in the raffle.

4. A game involves drawing a single card from a standard deck of 52 cards. One receives 75 cents for an ace, 25 cents for a king, and 5 cents for a red card that is neither an ace nor a king. If the cost of each draw is 15 cents, what is the expected value of the game?

6. A die is rolled until a one (1) shows. What is the probability that a one will show in at most four rolls?

8. Your friend wants to take the Ontario Real Estate License exam, which has a pass rate of about 60%. If a person fails the exam, their success rate improves to about 70% on the second try, and 75% on the third try. What is the probability that your friend will pass the exam in at most three tries?